Justin Peter was born a salesman. He’s an entrepreneur at heart, always ready for the next business proposition. When a friend mentioned an industry-wide need for hydrostatic testing, Justin’s interest was piqued. The fact that he had zero acquaintances or resources didn’t deter him from launching a business in South Texas. After extensive research, Justin realized that this DOT regulated industry wasn’t going anywhere. It’s business 101: Find the demand and then figure out a solution to meet that demand.

Justin wasted no time securing a loan to purchase one truck, one test trailer and hire a colleague who had experience in the industry. He simply drove around the Eagle Ford Shale offering testing to anyone who would listen. Luckily, a lot of people did listen. In fact, operators would flag him down requesting his services.

For two years, Justin developed relationships, ran the business and oversaw the entire back office aspect of his company. He was the only person running the show until April 2013 when he hired Gilbert Thomson to help manage JP Services’ significant growth. Now that he had the work aspect under control, he needed to concentrate on the business side of things.

He decided to shift a bit of the burden to someone he trusted — his brother. In July of the same year, Chad Peter joined the home office (literally staged in Justin’s home) to help streamline the non-field aspects of JP Services. Chad took care of policies, procedures and strategy behind the scenes while Gilbert and Justin maintained the field work.

The company soon expanded to the Gulf Coast and in 2014, they added West Texas to their growing service area roster. In December, JP Services merged with a private equity firm and have been setting records ever since.

JP Services:
Do You Need Help?
Contact one of our specialists to guide you in the right direction. 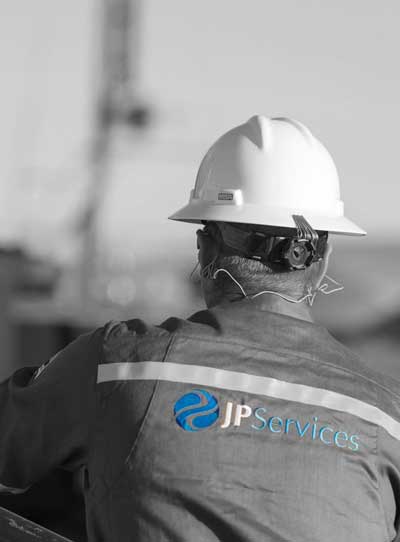